Catalin Carstoveanu, primary neonatologist at the “Maria Sklodowska Curie” Children’s Emergency Hospital in Bucharest, in an interview in which he talks about the use of the SaltMed saline inhaler (the only inhaler with constant emission of dry salt particles) in the hospital.

In the hospital, what is the most important condition, in the treatment of which you use SaltMed therapy?

Personally, I was involved in treating three types of patients. One and the most important, with obviously positive results – chronic lung disease in new-borns and infants.

A few words about this disease: it is a chronic lung disease, which is a very disabling one, whose main trigger is mechanical ventilation but which also has other triggers: oxygen administration, atelectrauma, infections, etc.

Mechanical ventilation must be conducted in a certain way, usually volutrauma and barotrauma are serious elements in the progression and triggering of the disease, but with all these preventive measures, chronic pulmonary disease is present.

We have many patients suffering from this disease, some of whom we simply cannot sometimes disconnect from mechanical ventilators due to the severity of chronic lung disease, which means long-term pulmonary ventilation. We have a former premature baby hospitalized with multiple diseases but also with chronic lung disease, which after 8 months we managed to disconnect from the ventilation devices, using SaltMed therapy.

We also have another premature baby with very low birth weight, with chronic lung disease, who was mechanically ventilated very gently, who received a very small oxygen fraction during mechanical ventilation, but who had a severe maternal-foetal infection and who now has a severe chronic illness. From the first minutes of the SaltMed administration, we managed to obtain a Tidal Expiratory Volume 20% higher and a saturation 2-3% higher at the same mechanical ventilation parameters. 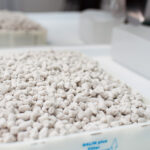