People exhale aerosols composed of small droplets of fluid that cover the airways during normal breathing. These exhaled bioaerosols can carry pathogens into the air and thus amplify the spread of certain infectious diseases, such as influenza, tuberculosis and severe acute respiratory syndrome.

The authors hypothesize that by altering the surface properties of the pulmonary airways with an inhaled nontoxic aerosol, the number of expired bioaerosol droplets could be substantially reduced and this would be a simple way to mitigate the spread of infectious diseases by air.

11 healthy adult volunteers aged 18 to 65 years with normal lung function were selected for participation in this study. Exclusion criteria included a history or evidence of lung disease (e.g., cystic fibrosis, chronic obstructive pulmonary disease, or severe asthma), a history or evidence of cardiovascular disease, or acute / chronic upper or lower respiratory tract infections, pregnancy, or breastfeeding . Each subject performed three clinical visits during the study to measure particle exhalation. During their first visit, subjects were randomly assigned to a treatment group and received an aerosol with either a saline solution or a DPPC / POPG surfactant. After at least a week, the subjects made their second visit. Particle exhalation was measured immediately before and 5 minutes, 30 minutes, 1 hour, 2 hours and 6 hours after inhalation. During the third visit, at least one month after the last treatment, the expiration of the particles was assessed in the absence of treatment. During dosing, each subject received saline aerosol or surfactant from a PARI LC Plus Jet nebulizer (PARI, Starnberg, Germany) connected to a compressed air source at 18 psi (1 psi = 6.89 kPa) (1.24 bar).

At the end of the study, it was established that some human subjects exhale more bioaerosol particles than other individuals during breathing. The first exhale on average more than 500 particles per liter in a 6-hour interval, and the others, less than 500. Of the group of 11 volunteers, six belong to the first category and five to the second.

Another conclusion of the research was that the administration of nebulized isotonic saline in these ”large producers ” individuals reduces the number of expired bioaerosol particles by 72.10 ± 8.19% for up to 6 hours after inhalation.

The authors recommend that the effects of saline solutions to modify the properties of the surface of the pulmonary airways, respectively on the transmission of airborne pathogens, be explored further. 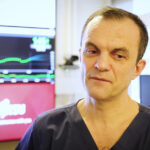 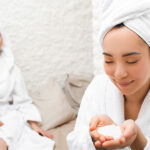